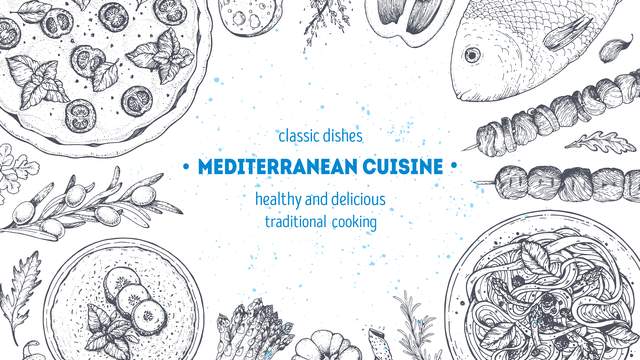 Mediterranean food is famous all over the world and typically when we think about this cuisine we think about olive oil, hummus, pita bread, feta cheese, and other staples. However Mediterranean food is much more than that; it has been influenced by a variety of cultures throughout the millennia and today it is considered to be not only one of the most delicious but also one of the healthiest cuisines in the world. So let’s have a look at how this world-famous cuisine was born and what it consists of.

It is noteworthy that the ingredients we nowadays associate with the Mediterranean cuisine were first widely consumed by ancient Egyptians as far back as the third century A.D. however the Mediterranean food didn’t get its name until the 1950s which is when this cuisine was first separated from the rest in a cookery book.

In case you’re not sure what Mediterranean food consists of exactly let’s have a look at some of the most common elements.

Most common ingredients in Mediterranean cooking.

The fruit of an olive tree is the heart of Mediterranean cooking. Thanks to the hot and dry Mediterranean climate olives have always grown here in abundance. Even though people from that region were exporting a lot of olive oil (and still do) they had more than enough left over to put it in almost all of their dishes (cold and hot appetizers, salads, stews, roasts, later on pasta, etc.)

The Mediterranean region also has a perfect climate for growing grapes (with a wide range of flavors). Other than being eaten raw as a fruit grapes have also been used here for thousands of years to make wine, to add extra flavor to salads, and they have even been baked into bread. And Mediterranean people figured out a way not to let the superfluous grapes go to waste by turning them into raisins.

Also, any Mediterranean restaurant worth their salt will have a wide variety of vegetables on offer. Artichokes, eggplant, tomatoes, cucumber, spinach, onions, lettuce, and other veggies can be grilled, puréed, sautéed, or simply served fresh in various salads. And since people there have always had access to vast Mediterranean Sea it isn’t surprising that seafood is also one of the staples.

While many cuisines in the world can trace their origin to one major source Mediterranean food is more of a compilation of culinary trends that stood the test of time after being introduced to the region by a variety of settlers.

Depending on the geographical region of the Mediterranean the cooking methods and ingredients can vary greatly. So, although French, Spanish, Italian, and Greek cuisines all share some common characteristics and can be classified as Mediterranean they, of course, have their unique traits as well.

Historically, life was booming and civilizations developed in the places that were located near water since water enabled people to sail from one place to the other and trade with their neighbors. And with the perfect geographical location Mediterranean region became the main trading place of the ancient world. People from Asia, Europe, and Africa used to constantly go on voyages of discovery, importing and exporting all sorts of goods whether edible or not. And through this active trade, certain ingredients and cooking techniques became popular in all territories adjacent to the Mediterranean Sea.

Typically, from a culinary point of view, the Mediterranean region is divided into three areas. Eastern Mediterranean which includes Turkey, Greece, Lebanon, etc. Is characterized by the heavy use of cheeses and yogurt. In addition, people add a lot of sumac, parsley, mint, and lemon juice to their food. Southern Europe includes southern France, Italy, and Spain, and here wine is often used both for drinking as well as for cooking. People in this region have also been fans of garlic and tomatoes for centuries. And lastly, we have a North African region that includes Morocco, Tunisia, Algeria, and Libya. This region of the Mediterranean is famed for its spices such as coriander, cumin, saffron, cinnamon, chilies, paprika, as well as many others. So as we can see with perfect geographical location and some of the world's major civilizations all located in close proximity of one another around the Mediterranean Sea this region was destined to produce a great cuisine.

However, we should note that the relationships between these civilizations have not always been amicable. There were frequent attempts at empire-building and conquests which also had an influence on Mediterranean cuisine. When one civilization invaded a territory and overthrew the government they often brought with them their own cultural practices which, of course, included their way of cooking (since food is a major part of any culture). On the other hand, the conquered population tried to resist the efforts of their conquerors to erase their culinary identity so in the end the two cuisines frequently amalgamated. With the passing of the years and decades, societies blended with one another and the new culinary practices were born. This type of culinary influence is especially obvious in Greece whose population has been heavily influenced by the eastern conquerors who occupied its territory for multiple centuries and who have certainly left their mark on the cuisine of Greece.

So as we can see, Mediterranean cooking, despite being different from one country to the other, can still be defined by many common characteristics. In the end, no matter which part of the Mediterranean region you are in there is one thing you can be sure of, the food you are going to taste will be absolutely delicious as well as healthy.

Fortunately for us, we now live in the age of technology and all of the delicious recipes are available to us at the click of a button and the ingredients can be easily sourced into your local supermarket. And if you don’t have time to cook or simply don’t feel like it then the ready meal service has you covered.

Here is the menu of our popular Mediterranean chef - https://www.sarefood.com/chef-ruslan-of-troy/20223/