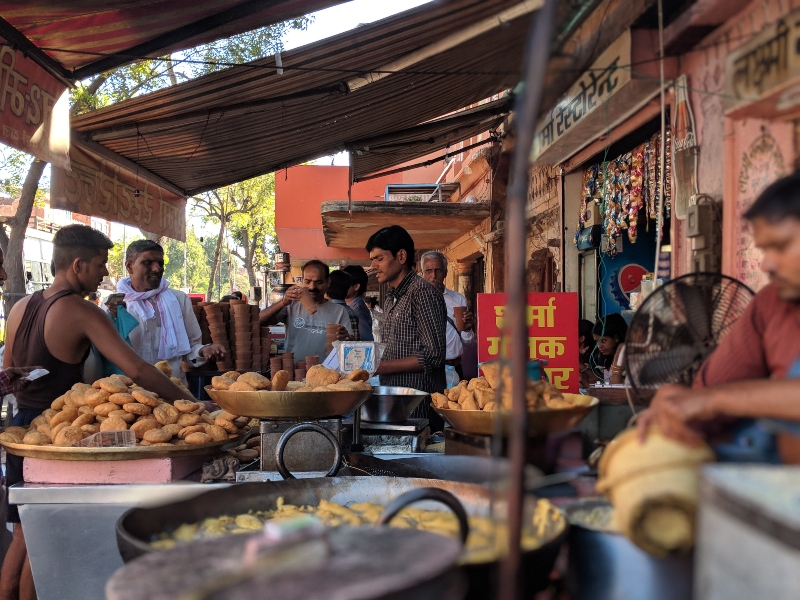 The street food in India is an epicurean representation of the bustling streets, quaint colorful lanes, and gregariously warm crowds. The streets in this country can barely be imagined without street food vendors and carts. Fondly known as “Chaat” or “Nukkadwala Food”, Indian street food is a melting pot of convenience, rustic home-cooking and tantalizing flavors that can slake and nourish every commoner at affordable prices. It has been rightly stated by many food journalists; India lives and eats on its streets. The spectrum of Indian “Chaat” ranges from a variety of nibbles such as roasted spiced peanuts, through a larger assortment of finger food such as deep fried fritters or “pakoras”; to more substantial wholesome meals such as “Chhole Kulche”.

“Samosas”, “Vadapav”, “Pav Bhaji” and “Paani Puri” are probably some of the most popular street foods of India.

Considered as “comfort food” or “sheer bliss” by most street food fanatics is the “Samosa”. Many would call it the Indian version of the Persian Sambuse, while others consider the Indian Samosa to be a distant cousin of the Latin-American Empanadas. A simple yet hearty preparation comprising of mildly spiced mashed potatoes, encased in a triangular crumbly and crispy wheat crust; the savory “Samosa” could easily pass off as the National Snack of India. An accompaniment of a tangy tamarind sauce or dip completes this snack. The optional addition of a liberal amount of chickpea curry or the “Chhole” atop the Samosa along with the tangy sauce goes a step ahead at making it a complete meal in itself.

Streets in the western states and metropolitan cities of India have crafted some unusual combinations to be the ideal “grab and go” meal for both classes and masses alike. “Vadapav” is one such popular fusion, especially in the Indian Financial Capital Mumbai. Rightly known as India's own Burger or rather the "Bombay Burger", it is the perfect "on the go" meal that is "tongue tingling" with a kick of strong and satiating flavors. This dish gives a quirky Indian twist to the 450 year old Portuguese “Bun" or "Pao", by replacing the meat patty with a sumptuous batter-fried potato patty. It has a generous dose of a relish made of garlic and green chilies, to give the soft textured and subtle tasting “Pav” a well-rounded appetizing taste.

Yet another "currylicous" twist to the Portuguese bread is the "Pav Bhaji". A hugely popular street food only next to “Vadapav”, this dish pairs the Portuguese “Pav” with the quintessential Indian mishmash of vegetables and spices that is locally known as "Bhaji".

The ‘Paani Puri” or “Golgappas” are probably the most dynamic and popular street food across the length and breadth of India, and are often referred to as “scrumptious little bombs”. Not just that, they are ranked amidst the top 20 popular street foods from across the world. A crunchy hollow shell made of wheatflour known as “Puri” is stuffed with spiced mashed potatoes and lentils, while a hearty dose of tamarind sauce with sour mint flavored water known as “Paani” fills in the rest of this shell. As the crunch of the hollow ‘Puri” gives way to the sweet sauce, followed by the tartness of the “Paani” climaxing into a savory potato-lentil filling; this street snack presents an explosion of flavors to our taste buds. Today, this snack has evolved into different avatars in different regions of India with a huge variety of innovative options used for filling the ‘Puri”.

Street foods of India are an endless list of ever-evolving urban fusions and flavorful combinations, that are steadily making their way from the streets of India to fine dine restaurants and world class Michelin star eateries.