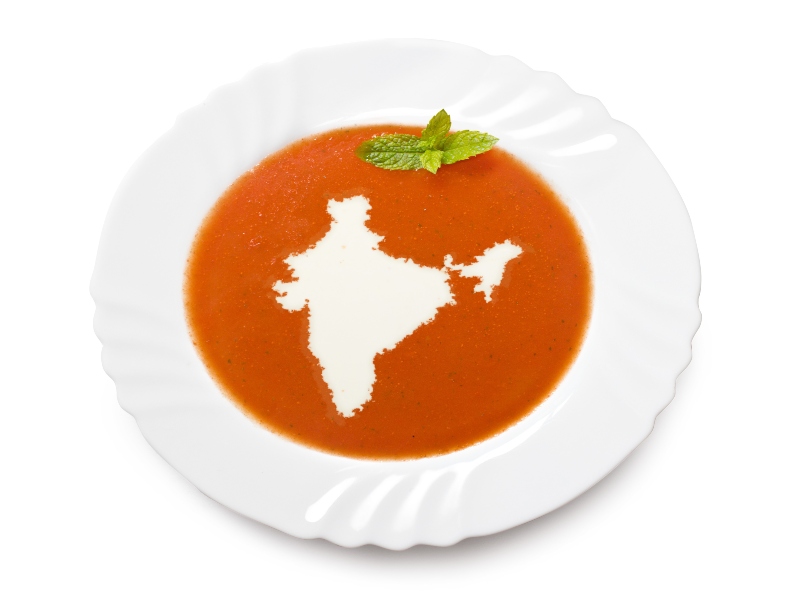 Indian cuisine can be best described as a joyride of flavors. The conglomeration of spices, condiments, herbs, vegetables and even grains reflect a vibrant confluence of various food cultures brought in by foreign invaders and those of neighboring countries. Be it the Persian, Portuguese, British or Chinese; India's ancient "ayurvedic, satwik vegetarian" roots have warmly embraced foreign cuisines to evolve into one that has its own distinctive global identity. Moreover, owing to its regional diversity, Indian cuisine presents a plethora of variations within itself. Starting with the northwestern states that are predominantly influenced by Middle Eastern flavors, as we traverse across the heart of the  of country, we find royal culinary remnants of Moghuls and their emissary dynasties such as “Nawabs” of Lucknow and “Nizams” of Hyderabad intermingling with the local fare eaten by commoners in these regions. Food from the eastern states derives its subtleness, freshness and fragile flavors of land and water from the neighboring China and Tibet. Whereas the south of India presents an array of robust and tangy flavors influenced by curry leaves, coconut, tamarind, etc.; giving the archetypical Indian curry it’s International Uniqueness. Adding a more cosmopolitan dimension to each ethnic cuisine are the Anglo, Dutch, Portuguese and French influences during the colonization era.

Indian cuisine goes far beyond the opulent aromas of freshly roasted spices; vivacious colors derived from vegetables, herbs and fruits; and the smooth velvetiness of clarified butter. Each ingredient has its own medicinal and nutritional purpose in a dish. The character of Indian food has been shaped by judicious amalgamations of natural ingredients with techniques and preparations that have been dedicatedly passed down through generations; evolving into precious family culinary heirlooms, and well-guarded gastronomic trade secrets. Described by many world chefs as a cuisine that uses the whole Palette of Flavors; Indian cuisine effortlessly blends the trickiest of spices and flavors to strike the perfect balance between nutrition and taste.